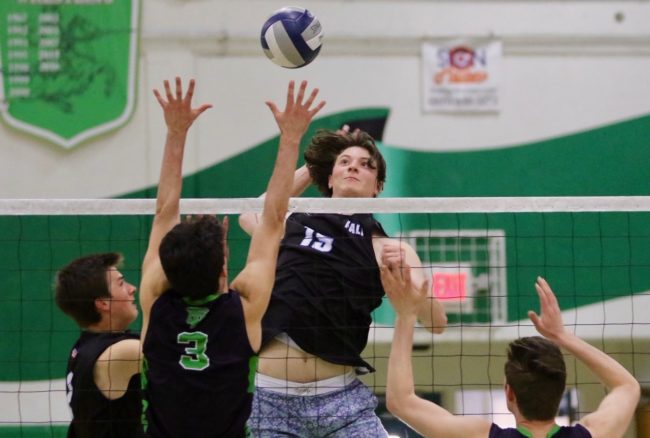 Justin Howard of Pacific Palisades, Calif., has been chosen to receive The Ohio State University Alumni Club of Los Angeles (OSULA) annual scholarship for the 2019-20 academic year, it was announced today by OSULA President Andre Billups. Howard was awarded a $5,000 scholarship from OSULA towards his first year on the Columbus Campus, where he plans to major in journalism and suit up as a member of the Buckeye men’s volleyball team.

Howard, a graduate of Palisades Charter High School, was a decorated student-athlete in and out of the classroom.  He earned numerous academic honors, including the AP Scholar Award and Principal’s Honor Award, en route to compiling a 3.975 grade point average.

On the volleyball court, Howard was a team captain for both Palisades Charter High School and the Pac6 Volleyball Club in 2019, Howard was a two-time All-CIF Los Angeles Team member during back-to-back-to-back city championship seasons.  He also led his Pac6 Volleyball Club team to a third-place finish in the 2018 Junior Nationals, competed with the Southern California Volleyball Association (SCVA) International team at the 2018 USA Volleyball High Performance Championship Tournament, and SCVA won its first USAV High Performance national title in ’18.

The 6-foot-6 Howard is expected to wear No. 11 and play middle blocker for first-year head coach Kevin Burch, a program that has won two NCAA Championships in the last four years.

“Ever since I was a little kid I dreamed of going to a school that had a mix of very respectable academics and valued sports as well,” explains Howard.  “I grew to be 6-6 and became a top volleyball recruit, but the first school that took interest in me was The Ohio State University. I took a visit and saw how wonderful the campus was, I loved the size of the campus. The facilities blew me away.

“Once I got my offer from the school, I took a little time to commit,” adds Howard, who wanted to make sure Ohio State was the right fit athletically and academically.  “I knew Ohio State was great and I could be a part of a brotherhood like no other, but I wanted to do some academic and major research.

“Due to my love of sports, I want to do something along the lines of sports broadcasting or journalism. I was told by the coaches about the program called BTN Network. They said I would be able to analyze and broadcast games under this program. I spoke to the head of the department of journalism and she informed me about the BTN Network and all of the wonderful features it provides. This program put me over the edge and I committed to The Ohio State University.”

Howard is the son of Nicole and David Howard, and his brother, Spencer, is a junior forward on the Northwestern University men’s soccer team this season. His second cousin, Carl Borack, competed in the 1972 Olympics (Munich) as a fencer and was inducted into the USA Fencing Hall of Fame in 2012.

“I know this university will be able to lead me to success in achieving my goals,” concludes Howard. “Due to the school’s large alumni population, the alumni at the university and throughout the entire world resembles an empire. I eventually want to become very involved in The Ohio State Alumni Club of Los Angeles and The Varsity O Alumni Society.”

As a member of the 2019-20 OSU men’s volleyball team, Howard will begin his career in a brand-new multi-purpose facility, the Covelli Center, a 3,700 seat arena which will serve as home to seven Buckeye varsity sports: volleyball, gymnastics, fencing and wrestling.

He says being a part of this new era which calls the Covelli Center home is a huge opportunity and one he is definitely looking forward to.

“I believe it is the nicest facility in the country and as a student-athlete I am extremely proud to be playing in this new high-quality arena,” declares Howard.  “I feel it will attract the best players in the country due to the beauty of it and the state-of-the-art technology.  It’s going to be breathtaking to start a new era of Buckeye volleyball in the Covelli Center and it is a dream come true as a student-athlete.”

OSULA would like to congratulate Howard on becoming our 2019-20 scholarship recipient and wish him tremendous success with the Scarlet and Gray. O-H!