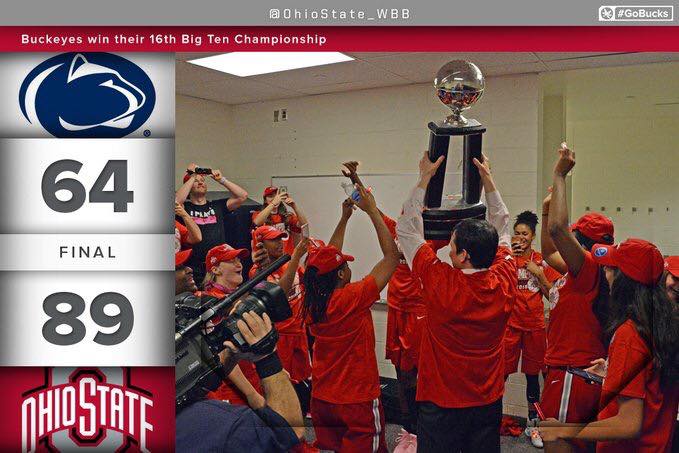 For the first time in four years, the confetti rained down on someone other than Maryland after Kelsey Mitchell scored 25 points and No. 13 Ohio State beat 17th-ranked Terrapins to win the Big Ten Women’s Basketball Tournament Championship 79-69.

”This was really special. We have five seniors who have really worked hard,” Ohio State coach Kevin McGuff said. ”For them to win this championship, it’s really special. I’m really proud of our team because this is a great conference.”

After trailing 22-17 at the end of the first quarter, Ohio State outscored Maryland 27-9 in the second period to take a 44-31 lead into the half. The Buckeyes started the second quarter with a 16-2 run before the Terrapins finally called timeout in an attempt to slow Ohio State’s momentum. The scoring onslaught gave the tournament’s top seeded Buckeyes the cushion they needed when the Terrapins made a run in the second half.

Maryland ended the third quarter on a 12-2 scoring run and continued to climb back into the game early on in the fourth. The Terrapins pulled within two points with about four minutes left to play in the game but the Buckeyes were ready for it and refused to buckle under the pressure of a Terrapins’ comeback.

In the second quarter, however, it was an entirely different game.

Maryland shot an abysmal 23 percent while Ohio State shot 57 percent from the floor.

”Tonight, one quarter we fell short and it came back to bite us,” Kristen Confroy said. ”I think our players grew up in this tournament. That’s what March is all about.”

Kaila Charles scored 20 points for Maryland and Kristen Confroy added 17 points for the Terrapins. Despite the poor second quarter that ultimately decided Maryland’s fate, head coach Brenda Frese is optimistic about the Terrapins’ upcoming tournament run because of the effort they gave in the second half.

”Blow for blow, I think our second half was very indicative of who we are and how we want to play (in the tournament),” Frese said. ”Everything that we’ve been through, you continue to see the (quality) character and the culture in our locker room. I told them in the locker room, `man, I’m just so proud of this team.”’

Maryland: The Terrapins (25-6, 12-4) will await their seeding in the upcoming NCAA Tournament. Despite the loss in the Big Ten Conference Tournament Championship game, Maryland has a solid resume that includes wins over Top-25 teams and will likely get to play some of its NCAA Tournament games at home.

Ohio State: The Buckeyes (26-6, 12-4) have now won 11 straight games against Big Ten Conference opponents, a streak that includes both regular season and conference tournament games. Sunday night’s championship game was the first conference title for the Buckeyes since 2011. Like Maryland, Ohio State will await its seeding for the NCAA Tournament and is also likely to have a few tournament games at home.

IT WAS FUN WHILE IT LASTED