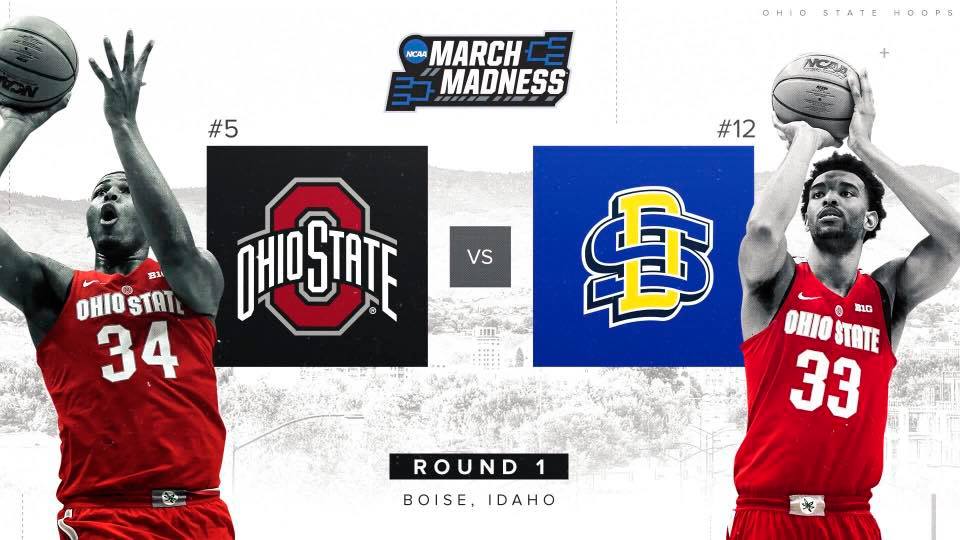 COLUMBUS, Ohio – The Ohio State men’s basketball team has earned the No. 5 seed in the West Region of the 2018 NCAA Division I Men’s Basketball Tournament and will face No. 12 seed South Dakota State out of the Summit League Thursday at Taco Bell Arena in Boise, Idaho. The meeting, which will be the first between the two programs, will tip-off at 4 p.m. ET Thursday on TNT.

South Dakota State, led by second-year head coach T.J. Otzelberger, won the Summit League regular-season and tournament championships and enter the NCAA Tournament with a 28-6 record. The Jackrabbits, who will be playing in their third-consecutive NCAA Tournament and sixth in the last seven seasons, are paced offensively by junior forward Mike Daum, who averages 23.8 points and 10.4 rebounds per game. Freshman guard David Jenkins Jr. chips in 16.1 points per contest while senior forward Reed Tellinghuisen adds 12.0 points per game.

2017-18 Buckeyes in NCAA Play
The 2017-18 Ohio State roster has seven games of NCAA Tournament experience and two starts, both by Jae’Sean Tate, entering the 2018 NCAA Tournament. Andrew Dakich leads Ohio State with three games of NCAA experience in his time at Michigan while Tate, Kam Williams and Keita Bates-Diop each played in two NCAA contests for the Buckeyes in the 2014-15 season. Tate averages 9.5 points and 6.0 rebounds in NCAA Tournament play while Bates-Diop adds 3.0 points per contest.

2017-18 Buckeyes in Postseason Competition
After the 2018 Big Ten Tournament, the Buckeyes enter the 2018 NCAA Tournament 39 total appearances and 16 starts of postseason experience on the roster (combined Big Ten, NIT and NCAA Tournament games). Kam Williams has appeared in 10 postseason games, including four starts, averaging 5.8 points and 1.6 rebounds per game. Andrew Dakich has played in nine postseason games off the bench while Keita Bates-Diop has averaged 7.3 points and 2.6 rebounds in his seven postseason games, three in a starting role. Jae’Sean Tate has started all six of his postseason appearances, averaging 9.9 points and 6.0 boards per game. C.J. Jackson has averaged 8.5 points, 6.0 assists and 3.0 rebounds per game in two postseason starts, while Micah Potter and Andre Wesson have each made a pair of postseason appearances off the bench. Freshman Kaleb Wesson is the only other Buckeye with postseason experience after going for five points and three rebounds in Ohio State’s Big Ten Tournament loss to Penn State.

Buckeyes vs. 2018 NCAA Tournament Teams
Ohio State went 5-5 in the 2017-18 season against teams advancing to the NCAA Tournament. The Buckeyes picked up wins over Radford, Texas Southern, Michigan State and Purdue, lost to North Carolina, Gonzaga, Clemson and Butler and split their two meetings with Michigan.