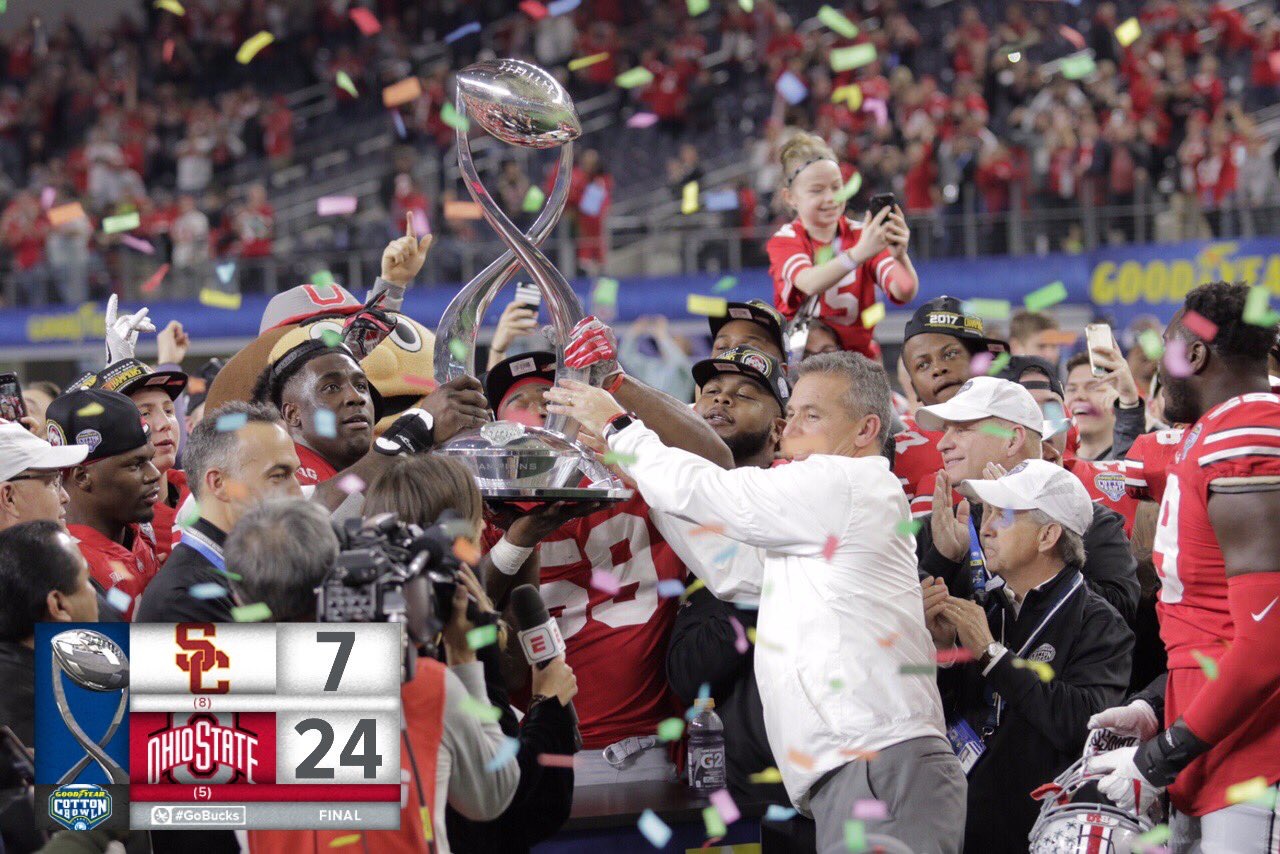 Ohio State dominated the opening half and the Buckeye defense held Sam Darnold and the USC offense in check all game as Ohio State downed USC 24-7 to win the Goodyear Cotton Bowl Classic.

The Buckeyes capped the season with their 12th victory and defeated USC for the first time since the 1974 Rose Bowl.

J.T. Barrett put the finishing touches on the one of the best collegiate careers of any player in Big Ten history. He became the league’s all-time leader in total offense, passing Purdue great Drew Brees in the game. Barrett was 11-of-17 for 114 yards and also was the team’s leading rusher with 66 yards and two scores. 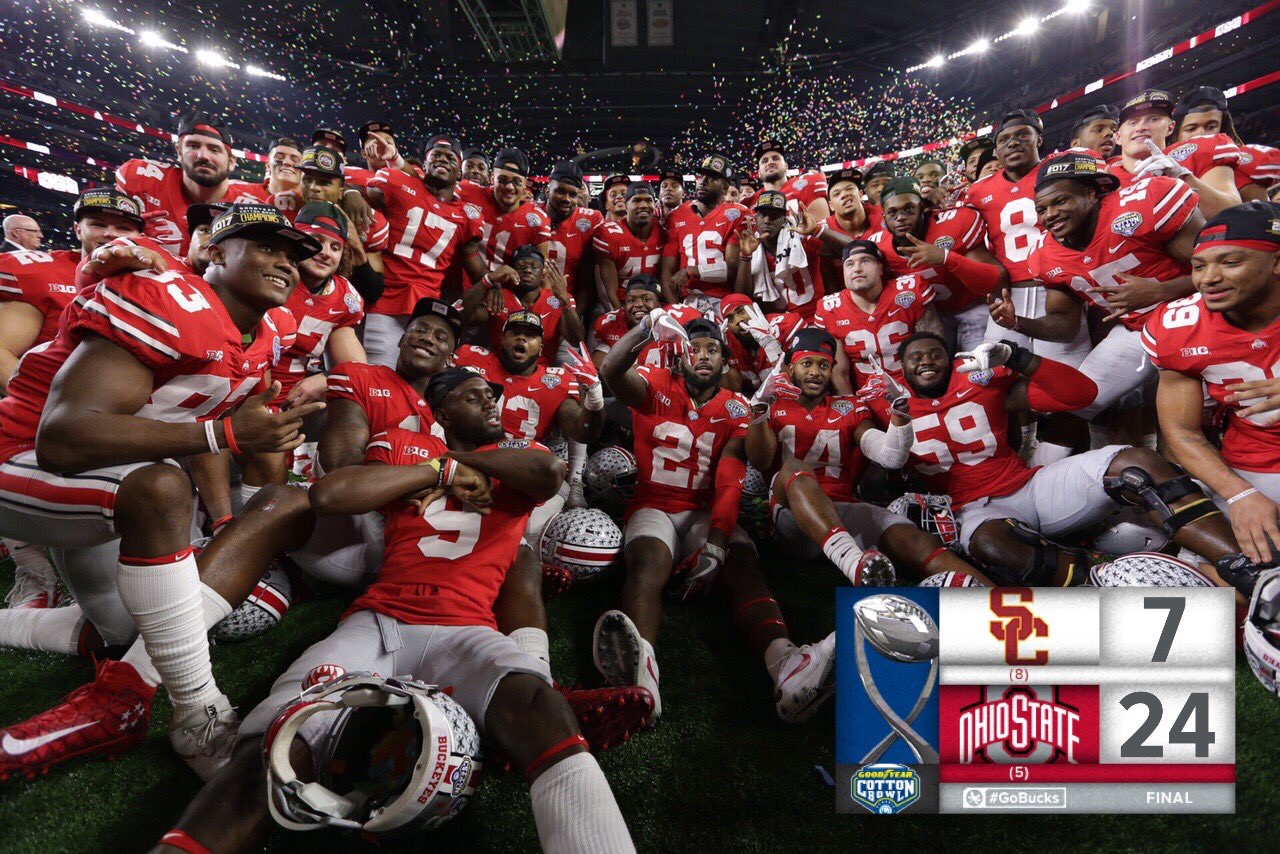 The OSU defense forced four turnovers on the night and the offense scored 21 points off those takeaways. Sam Hubbard had 2.5 of the Buckeyes’ eight sacks of Darnold while Nick Bosa added 1.5 sacks. Jordan Fuller led the team with 10 total tackles including eight solo stops.

The Buckeyes took advantage of a USC fumble on the opening possession and found the end zone just five plays later for a 7-0 lead.

Sean Nuernberger connected on a 26-yard field goal on the first play of the second quarter and 13 seconds later, Damon Webb stepped in front of a Darnold pass and returned it 23 yards for a score making it 17-0. That was Webb’s team-leading fifth interception of the season and it was the Buckeyes’ first pick-6 this year. 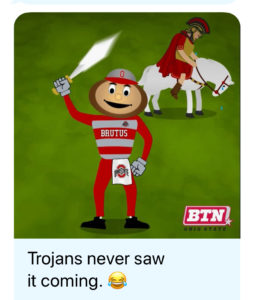 A third first-half Trojan turnover resulted in another Barrett touchdown run, this time from 28 yards out, and the lead swelled to 24-0 with five and a half minutes to play until halftime.

Right before the half, KJ Hill muffed a punt and USC recovered at the Ohio State 15 yard line. The Trojans then seized a bit of momentum with a score and the teams headed to the locker rooms with OSU in front 24-7.

Neither team was able to put any points on the board in the second half. USC pushed the ball inside the OSU 10 yard line but the ensuing field goal attempt hit the right upright. 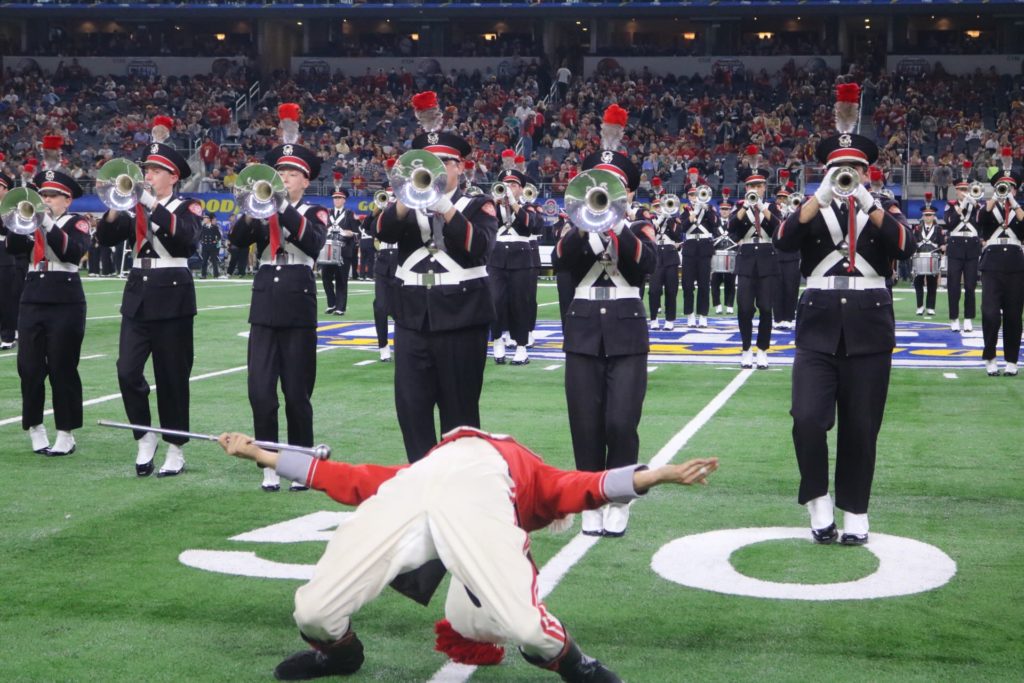 • Head coach Urban Meyer improved to 11-3 in his career in bowl games and 4-2 at Ohio State. Meyer is also 48-4 with more than one week to prepare.
• The Buckeyes snapped a seven-game losing streak to Southern California and won its first game over the Trojans since the 1974 Rose Bowl.
• Ohio State’s defense produced a season high in sacks (eight), tackles for loss (14) and turnovers forced (four).
• With his one-yard TD run in the first quarter, Barrett set the single season record for touchdowns responsible for in a season with 46. He previously held the record of 45 as a freshman in 2014.
• Ohio State finished its season with a 4-1 record against Top 25 competition and includes three wins over teams that were ranked in the top 10 – No. 2 Penn State, No. 4 Wisconsin and No. 8 USC.
• Barrett also set another single season record in the first half: total yards. The senior QB passed his own mark of 3,772 on his 28-yard touchdown run in the second quarter.
• In the fourth quarter, Barrett passed Drew Brees as the Big Ten’s total offense leader. He finishes his career with 12,697 yards. He was also 38-6 as a starting quarterback.
• Kicker Sean Nuernberger made a field goal for the seventh consecutive game.
• Damon Webb’s second-quarter interception return for touchdown was the second of his career. He previously returned an INT 36 yards against Nebraska in 2016 for the opening score of the game vs. the Cornhuskers. It was also Ohio State’s first postseason pick-six since Steve Miller’s 41-yard INT return in the 2015 CPF Semifinals vs. Alabama. 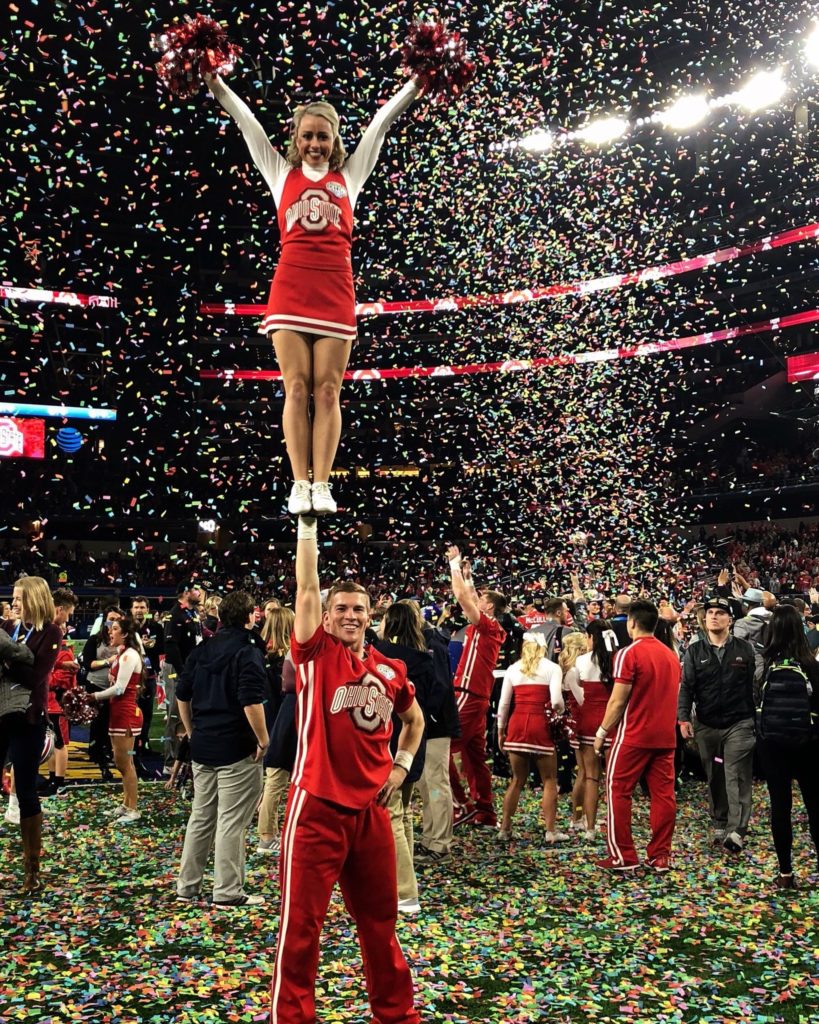 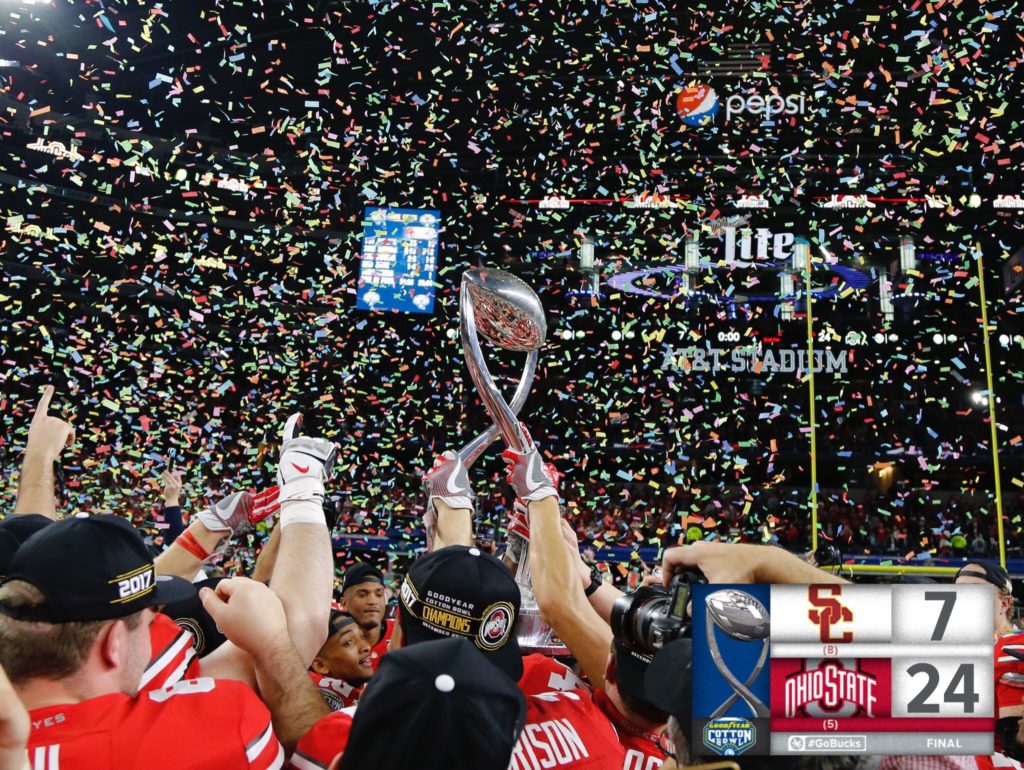