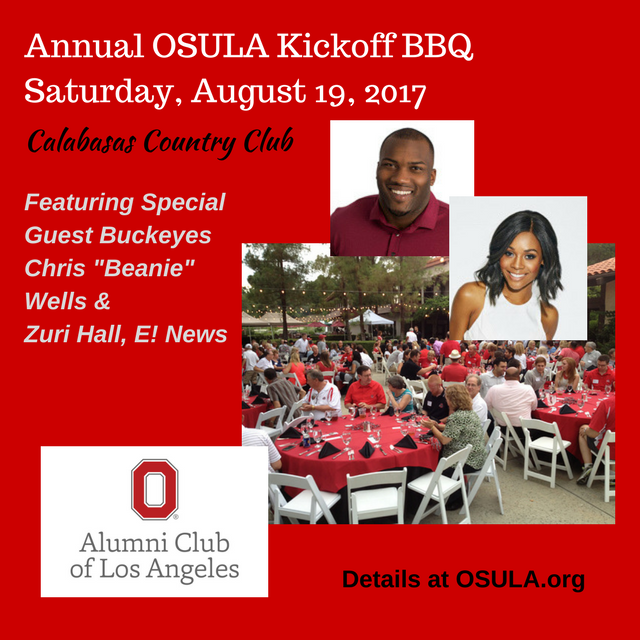 I hope you are just as excited as I am about this upcoming football season. Although we have lost a lot of players, as you know, we always have someone waiting to shine. I invite you to Kickoff this season with us at our Annual Kickoff BBQ and General Meeting on Saturday, August 19, where we will be honoring a Buckeye Legend and a Person of the Year. I really hope to see you there to honor these amazing individuals. You can register for our biggest club event of the year at Annual Kickoff BBQ and General Meeting!

Without further ado, our Buckeye Legend and Person of the Year Honorees are:

Former OSU running back Chris “Beanie” Wells was All Big Ten First Team, All-American Second Team and two-time Team MVP during his tenure at Ohio State from 2006-2008. He was a first-round NFL DRAFT pick by the Arizona Cardinals and played four seasons (2009-2012), rushing for 1,047 yards on 245 carries with 10 touchdowns in 2011.  Wells is now the co-host of Tim and Beanie on the flagship radio home of the Buckeyes, ESPN Radio 97.1 The Fan in Columbus and on the internet.

ZURI HALL — Person Of The Year:

OSU alumnae Zuri Hall is an on-air correspondent and frequent co-host for E! News on the E! Entertainment Television network.  Zuri has been a recurring guest on VH1’s Big Morning Buzz Live and has appeared on E!’s Fashion Police with Joan Rivers. One year after graduating from The Ohio State University on full academic scholarship, Hall won her first Regional Emmy ​in the “Outstanding Host – Talent” category.

Help us honor these proud Buckeyes and kickoff our excitement for the 2017 football season SoCal style by joining us this August 19 at the Calabasas Country Club!  We look forward to seeing you then!

Connect with OSULA on: