COLUMBUS, Ohio – The Ohio State Synchronized Swimming Team capped their tremendous 2017 season with a National Championship, its 30th in program history. The Buckeyes, who were hosting the US Collegiate Championships for the second time in the last three seasons, finished with 100 points which bested runner-up Stanford at 88 points.

The 30 national titles in program history are the most of any sport at Ohio State. This is the synchro team’s first title since also winning it in their home pool in 2015.

“I am thrilled for our team but mostly for our seniors,” said head coach Holly Vargo Brown. “From day one, the seniors have been the driving force telling everyone that we are getting this done this year. I am very happy for them that they are going out on this note. It’s so cool.”

The day started great for the Buckeyes as the trio of Lorraine Hack, Alyssa Hoying and Monica Velazquez-Stiak performed a beautiful routine and finished runner-up with a score of 83.6667. That score matched their score from Thursday’s prelims which was a season-high.

The duet final may have been the most emotional of the day. Swimming for the last time together in a collegiate event, seniors Emma Baranski and Elizabeth Davidson turned in one of the best performances of their careers. All of the years of hard work and overcoming multiple struggles culminated Saturday with a national championship winning performance. The two received a score of 84.4333 which was their best of the season. Baranski and Davidson are the first Buckeye duet to win a national title since Meghan Kinney and Michelle Theriault in 2010.

Perhaps just as impressive was the duet of Hoying and Velazquez-Stiak. They notched a score of 84.0000 to finish runner-up behind Baranski and Davidson. All four shared tearful embraces with teammates and coaches as the scores were announced. 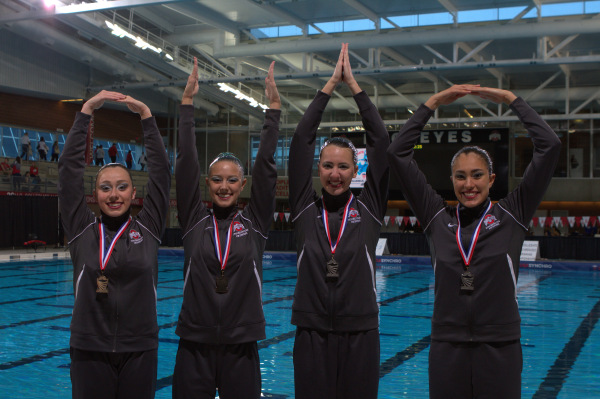 “The trio started the day and did exactly what we needed them to do, come right in between the two great Stanford teams,” Vargo Brown said. “We then felt that if we counted two duets this year, we could put enough pressure on the one Stanford duet in an event in which they are reigning champions, then maybe something good could happen. I didn’t expect us to finish 1-2 like we did. Our two duets just swam amazing today.’

Of the 12 duets that swam in Saturday’s finals, the Buckeyes were the only two teams to improve their scores from Thursday’s prelims.

Baranski came into her senior season with the target on her back as the defending national solo champion and she handled that pressure beautifully. The Hamden, Conn., native swam with grace and precision on Saturday to post a season-high score of 85.2667 and successfully defend her national title. She is the just the fourth Buckeye soloist to win back-to-back solo national titles. 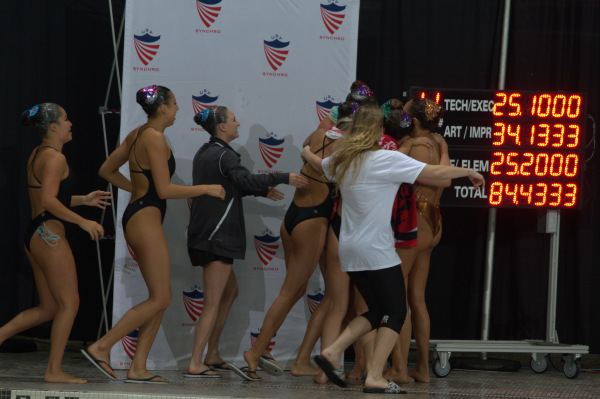 “You could see when Emma swam that everyone was amazed by her ability to perform,” said Vargo Brown. It was wonderful for her to know that all we needed her to do was go out and swim her normal routine and it sort of turned into a final farewell performance in front of the home crowd which I’m sure gave her a little extra boost. I’m very happy for her.”

The perfect way to end the day would be two great team performances and that’s just what the Buckeyes got. The Scarlet team of Morgan Boneberg, Wenjing Deng, Noelle St. John, Baranski, Davidson, Hack, Hoying and Velazquez-Stiak won its second national title in the last three years with a score of 85.1333. The Gray team, which consisted of Alexa Aton, Tori Baron, Phoebe Coffin, Jessica Giannuzzi, Sarah House, Natalie Huibregste, Jasmine Pulido, and Lizzie Walsh, followed with a rousing performance to earn a score of 83.0000 and finish third.

“The crowd that we had today was absolutely incredible,” Vargo Brown added. “If anyone was a little tired, there was no way you could be tired in front of them. They were so energetic and then to hear the O-H-I-O chant going throughout the stands after each performance was special.” 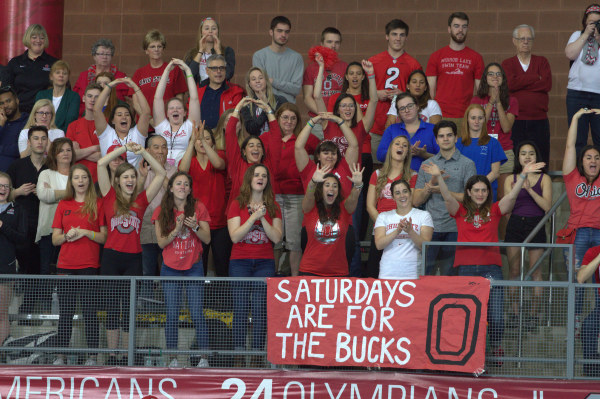 Ohio State fans at the 2017 US Collegiate Championships

The US Collegiate Championships were also a culmination of a season-long Zero Waste initiative by Ohio State and the synchronized swim team. All four events in McCorkle this season were part of Ohio State’s Zero Waster effort which has a goal of diverting at least 90 percent of material from the landfill to either recycling or compost. 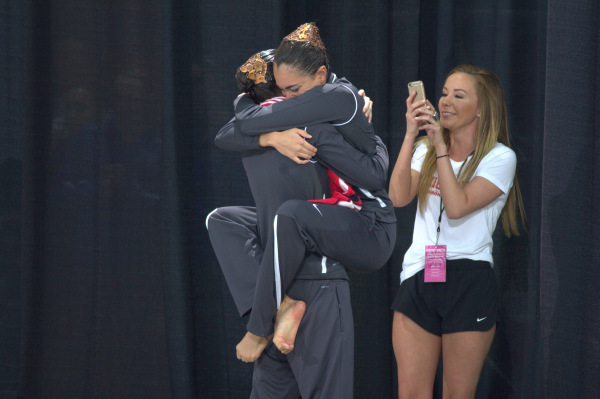 “Although we are disappointed with 4th place this year,” head coach Donna Knisley said, “everyone worked very hard to get to this national championship and we will continue to work toward our return next year. We had a fantastic regular season with no losses and plan to continue the same next year.”

The Buckeyes were able to claim their women’s aggregate national championship thanks to some great performances on Thursday, including Andrianova’s title. After placing second in women’s 40-shot air pistol the day before (1,075), Ohio State came back to place first in women’s sport pistol (1,610) which vaulted them into the top spot of women’s aggregate.

Andrianova’s championship came as a result of her score of 555 in women’s sport pistol; teammates Kara Moody (548) and Emily Rust also placed in the Top 5 of that event.

Friday was the last day of competition in Fort Benning with open air pistol the lone event remaining. OSU placed fourth in that event as well to secure its fourth place overall finish. Individually, Anthony McCollum claimed a silver medal in open air with his score of 565.