COLUMBUS, Ohio — Third-ranked Ohio State has earned a place in the semifinals of the College Football Playoff for the second time in the playoffs three-year existence and will play the No. 2 Clemson Tigers in the PlayStation Fiesta Bowl Dec. 31 at Glendale, Ariz. Game time is set for 7 p.m. (EST; 5 p.m. MST) at the University of Phoenix Stadium. 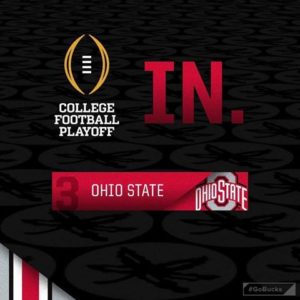 Ohio State is the first non-conference champion to be selected by the CFP committee for the playoffs. The committee had chosen eight conference champions in its first two playoffs, including a resurgent Ohio State team in 2014 that defeated Wisconsin, 59-0, in the Big Ten title game for its 11th consecutive win that vaulted it from No. 5 in the CFP poll to No. 4 and a semifinal matchup with No. 1 Alabama.

A 3-1 record vs. teams in the current CFP rankings was the key factor to include Ohio State in the playoffs. The Buckeyes defeated No. 7 Oklahoma by 21 points on the road in September; it defeated No. 8 Wisconsin, champion of the Big Ten west division, on the road in overtime in October; and they defeated their rivals, No. 6 Michigan, in double overtime to cap its 11-1 season. Ohio State also defeated Nebraska, 62-3, when the Cornhuskers were ranked No. 10 by the CFP committee.

The Buckeyes’ only loss came at No. 5 Penn State, 24-21, in a second consecutive nationally-televised night game on the road after playing at Wisconsin the previous week. Penn State defeated Wisconsin, 38-31, Saturday night to win the Big Ten championship.

The Buckeyes have won five consecutive games and boast the nation’s No. 4 total defense (282.3 yards per game allowed), including the No. 1 pass efficiency defense and the No. 3 scoring defense (14.2). Ohio State is also 21st nationally in total offense behind a Top 10 ground game — ninth at 258.3 yards per game — and the fifth highest possession time: 33:55.

Clemson is 12-1, champion of the Atlantic Coast Conference and in the College Football Playoff for a second consecutive year. The Tigers, led by quarterback Deshaun Watson, rank 13th nationally in total offense behind a terrific passing game that nets 332.6 yards per outing (7th nationally). The Tigers are ninth in total defense, allowing just 313.9 yards per game.

Ohio State and Clemson’s only other meeting came in the 1978 Gator Bowl. Clemson won that game as well, 17-15, in what would be legendary coach Woody Hayes’ final game as coach.

Ticket Information
Fans interested in purchasing tickets in the Ohio State sections through Ohio State University for the PlayStation Fiesta Bowl are encouraged to submit a request now at the following link on the Athletic Department website: http://go.osu.edu/PublicCFPTickets.

Ticket prices start at $120 including service charges. Ohio State receives approximately 13,000 tickets for the game and, should general public tickets be available after priority requests from season ticket holders, faculty, staff and students are fulfilled, a public sale will commence beginning with those individuals on the waiting list.

Priority ordering for donor groups, season ticket holders, and Varsity O Football members is ongoing, and will conclude Friday, December 9 at 5:00 p.m. Detailed instructions for submitting priority ticket requests were emailed to these groups on November 14. Information regarding the Faculty/Staff and Student ticket lotteries, which will begin on December 6, was emailed to eligible ticket holders this afternoon.

COLUMBUS, Ohio (AP) – November 26, 2016 — Curtis Samuel swept in for a 15-yard touchdown after Ohio State barely converted a fourth-and-1 and the second-ranked Buckeyes beat No. 3 Michigan 30-27 in double overtime Saturday to win one of the greatest games in the history of one of college football’s greatest rivalries. 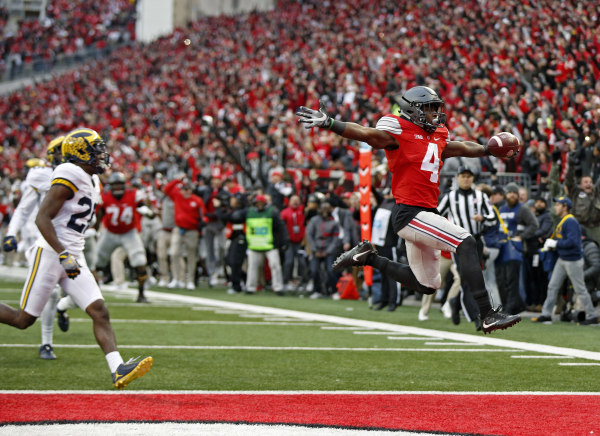 Ohio State Buckeyes running back Curtis Samuel (4) jumps into a the end zone for the game winning touchdown in a double overtime win over Michigan Wolverines touchdown at Ohio Stadium in Columbus, Ohio on November 26, 2016. (Kyle Robertson / The Columbus Dispatch)

Facing fourth-and-1 from the 16, Ohio State coach Urban Meyer decided not to kick a potential game-tying field goal with a kicker who had already missed two short ones in regulation.

J.T. Barrett kept it on fourth down and slammed into the back of his blocker, A.J. Alexander, right at the line to gain. The first-down call stood up to video review.

On the next play, Samuel, who had made a swerving, change-of-direction run to set up the fourth-and-1, found a lane and raced into the end zone to win it.

”Been a part of some crazy football games here,” Barrett said. ”That one was No. 1.”

The scarlet-clad crowd covered the field after the game. It was the first matchup to go to overtime in the 113-game history of the rivalry. 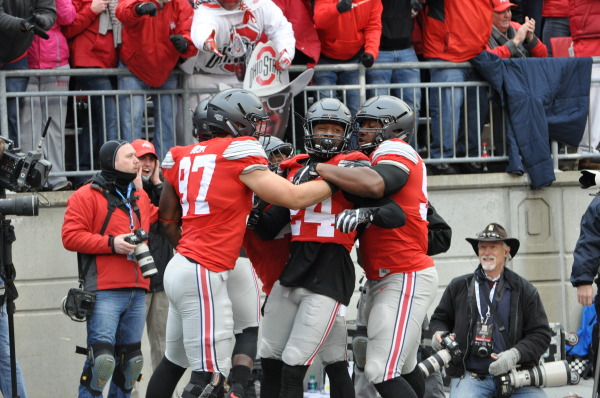 The Buckeyes will have to wait until Penn State plays to find out if they will play for the Big Ten title. Still, they added to a resume that already impressed the College Football Playoff selection committee.

But if this is just the start of a new Ten Year War for Michigan and Ohio State, with Meyer and Harbaugh playing the roles of Woody Hayes and Bo Schembechler, there is much for to look forward to for college football fans.

Ohio State wiped out a 10-point third-quarter deficit and dominated the fourth quarter, but Tyler Durbin missed a 20-yard field goal to tie it with 7:01 remaining.

Barrett and the Buckeyes gave him another chance, this time from 23 yards with a second left in regulation and Durbin nailed it.

Barrett scored on a quarterback draw and Ohio State’s first possession of OT to give the Buckeyes the lead, but Michigan tied it on a 5-yard touchdown pass on fourth down from Wilton Speight to Amara Darboh. 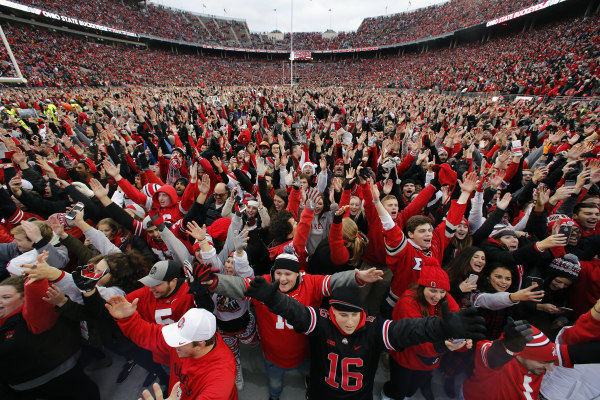 Notes from the Buckeyes’ 30-27 victory over No. 3 Michigan 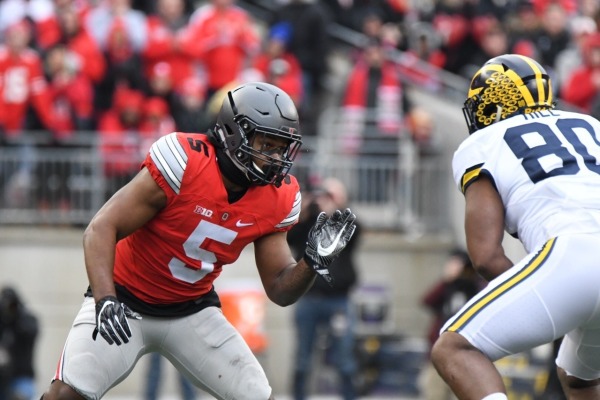 Raekwon McMillan (5) led the Silver Bullets with 16 tackles against TTUN.

Baker, Elflein, Holmes, Hubbard and Lewis discuss the Buckeyes 30-27 victory over No. 3 Michigan

Sam Hubbard, Ohio State defensive end On setting the edge against Jabrill Peppers on third down “I wasn’t thinking there would be a sweep or something like that. He faked the ball and tried to get on the edge and squared up so he could shake me. And I squared up. I just dove for his legs and it was good to have Malik there to help me out.”

Pat Elflein, Ohio State offensive lineman On winning this kind of game “It’s a testament to our coaches and to our program and how we never stop swinging. That’s how we practice all year round. To come out a few times, like at Michigan State and Wisconsin, and never stop swinging. This is such a great game to send the seniors off with.”

On the issues on offense “We were getting pressure. I’m not exactly sure about everything else. I just know we gave up a lot of sacks so we have to get better on offense with that.”

Jalyn Holmes, Ohio State defensive end  On defense’s attitude in overtime “Our whole thing was to just win the game. We needed to put our offense in good position to win the game.”

Tyquan Lewis, Ohio State defensive lineman  On defensive pressure “It was basically all straight rushes. We used our techniques and stuck to everything we knew. We stuck with everything Coach Johnson has taught us. We had to be very efficient.”

Jerome Baker, Ohio State linebacker  On defense and offense helping each other “We just try to get out there and do our job. We didn’t have our heads down. The offense had the momentum. They had their ups, and we just had to go out there and play.”

On preparing for the game “Preparing for The Team Up North is always at the next level. Especially ever since they have Jim Harbaugh. They do a lot of different things on offense. They really try to confuse you with the different personnel settings and formations, alignment, shifts, and motions. It was a really intense week.”