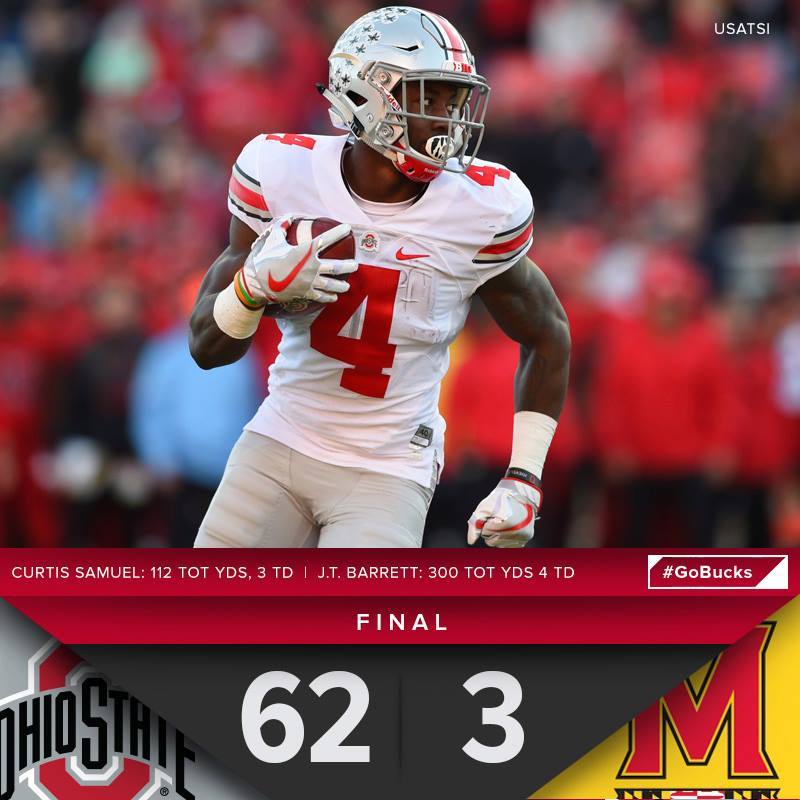 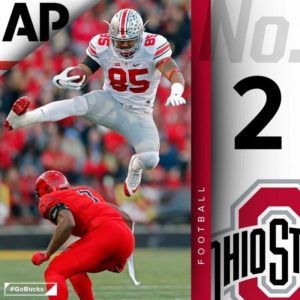 Buckeyes Leap to No. 2 in Associated Press Top 25 Poll

COLLEGE PARK, Md. — It’s November and Ohio State is stacking up 62-3 victories. Bodes well, huh? Last week’s victory by that score over Nebraska was stunning. That the Buckeyes did the same thing against Maryland on Saturday wasn’t. Nebraska was a top-10 team. Maryland had lost four of its past five games. But the fact that the Buckeyes dominated the Terrapins is telling. Saturday’s game at Capital One Field was their first on the road since losing at Penn State on Oct. 22.

Chastened by that loss, Ohio State is a different team now. That the Buckeyes were a prohibitive favorite against the Terrapins was another challenge to meet. They said during the week that they wouldn’t overlook Maryland because of their Nov. 26 showdown against Michigan — or even next week’s revenge game against Michigan State.

The second straight blowout will almost certainly move Ohio State (9-1, 6-1 Big Ten) into the top four of the College Football Playoff rankings on Tuesday because No. 2 Clemson lost to Pittsburgh. The Buckeyes are ranked fifth.

Nothing OSU did Saturday will hurt its standing. By the time coach Urban Meyer began pulling his starters in the third quarter, Ohio State had outgained Maryland 468-141. Hybrid Curtis Samuel scored three touchdowns and Mike Weber ran 12 times for 93 yards. Neither touched the ball in the second half, which began with the Buckeyes ahead 45-3.

Despite not always looking sharp, J.T. Barrett completed 18 of 27 passes for 253 yards and two touchdowns before turning it over to Joe Burrow late in the drive that made it 55-3. The Buckeyes’ defense was smothering, particularly against the run. Even excluding Ohio State’s three sacks, Maryland (5-5, 2-5) ran for only 23 yards on 16 carries in the first half. 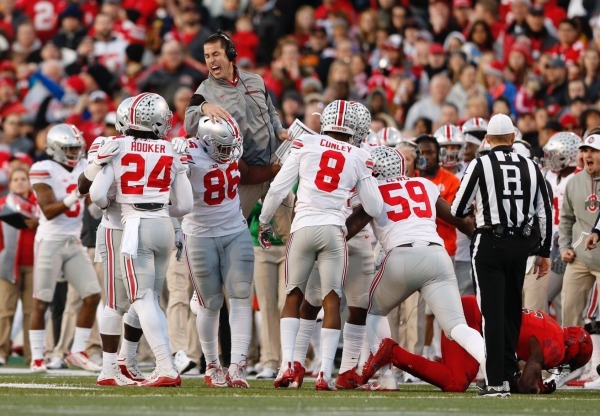 “The goal is always to stop the run and disrupt the line of scrimmage,” defensive end Tyquan Lewis said. Only two of Maryland’s 15 possessions lasted longer than six plays. Ohio State stopped the Terps on 14 of 15 third-down chances.

Maryland’s slim chance to hang with Ohio State probably ended when starting quarterback Perry Hills left the game in the first quarter after injuring his left shoulder. Caleb Rowe led the Terrapins to their only score — a field goal — on his first possession.

Other than that 76-yard drive, the Buckeyes’ suffocating defense made the Terrapins go back into their shell. Maryland has had success this year with screen passes. Ohio State was ready for them. “We were expecting eight to 10 screens, and we played them so well that we made them turn the page on that,” defensive end Sam Hubbard said. Ohio State’s offense, in contrast, moved the ball almost at will. The Buckeyes had 32 first downs and finished with 581 yards.

Ohio State asserted itself by scoring touchdowns on its first two drives. On OSU’s fourth possession, after Maryland’s field goal, Barrett threw deep to Samuel on identical patterns against single coverage. The first drew a pass-interference penalty. The second produced a 36-yard touchdown to make it 21-3.

“He creates mismatches all the time and exposes those one-on-ones,” Barrett said. “We understand that teams are going to want to play man against us. With that, we have to take our shots, and that’s what we did today.”

Samuel scored again on a 5-yard carry following an interception by Marshon Lattimore, and the Buckeyes added 45- and 34-yard field goals to pad the cushion at halftime to 42 points. That gave ample opportunity for backups to play in the second half. Two of the more promising freshmen — running back Demario McCall and wide receiver Binjimen Victor — scored to conclude the carnage.

“November’s here, and we have a big one coming one week from today,” Meyer said.

And an even bigger one in two weeks. Looks like they’re ready.