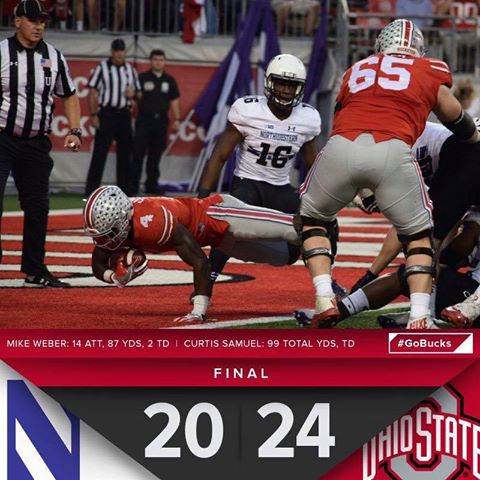 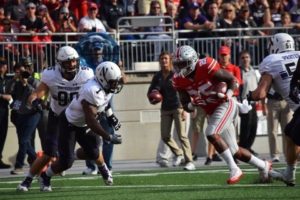 Northwestern (4-4, 3-2) got to the Ohio State 3, but settled for a 33-yard Jack Mitchell field goal to close to 24-20 with 3:31 left. The Buckeyes mounted a final clock-eating drive. Barrett hit Noah Brown for 16 yards on third-and-8 and then took off on a 35-yard run to convert a third-and-10 and put the Buckeyes in the clear.

”It was a pretty good chess match back and forth, and I just loved the way we finished it off,” Ohio State coach Urban Meyer said. 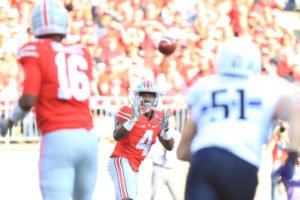 ”I’m comfortable where we’re at,” Barrett said. ”I know there’s things we can absolutely be better at as far as our offense. We’re executing.”

Mike Weber rushed 14 times for 87 yards and two touchdowns, the first coming on Ohio State’s opening drive. He found the end zone against in the second quarter, chugging around the right end for a 23-yard score.

Clayton Thorson was 25 for 42 for 256 yards with a touchdown and a first-quarter interception for Northwestern. Austin Carr, the Big Ten’s leading receiver, caught eight passes for 158 yards.

”It obviously didn’t start the way we wanted it to, spotting them a couple scores, but the guys didn’t flinch and kept swinging,” Northwestern coach Pat Fitzgerald said. ”And, you know, we ended up one punch short.”

UP NEXT Ohio State: The Buckeyes host No. 7 Nebraska.