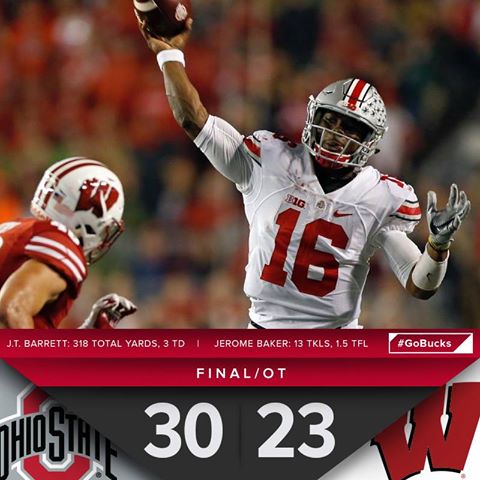 No. 2 Buckeyes celebrate 30-23 overtime win over No. 8 Wisconsin in Madison.

The do-it-all quarterback threw a 7-yard touchdown pass to leaping receiver Noah Brown in overtime, and the second-ranked Buckeyes finished off No. 8 Wisconsin with a sack on fourth-and-goal from the 4 for a 30-23 win on Saturday night.

“That was a ball game,” coach Urban Meyer said.

Just in time too, after school officials warned fans that severe weather was rolling through the area right before the final play.

The Buckeyes opened overtime with Barrett’s touch pass to Brown in the corner of the end zone for the go-ahead score.

The Badgers gained chunks of yards in the first half on the Buckeyes’ vaunted defense, but often had to settle for field goals. They led 16-6 at halftime.

It took a little while for Ohio State to get its bearings in the second half.

But Barrett, as usual, led the Buckeyes’ charge.

“We grew up even more this week,” Barrett said.

Ohio State: Barrett proved his mettle once again, shaking off an interception in the third quarter. He hit long pinpoint passes, often on the move, into tight coverage. The Buckeyes made it a point to work on the passing game leading into the game after problems last week against Indiana. That work paid off, though it didn’t come easy against the Badgers’ tough defense.