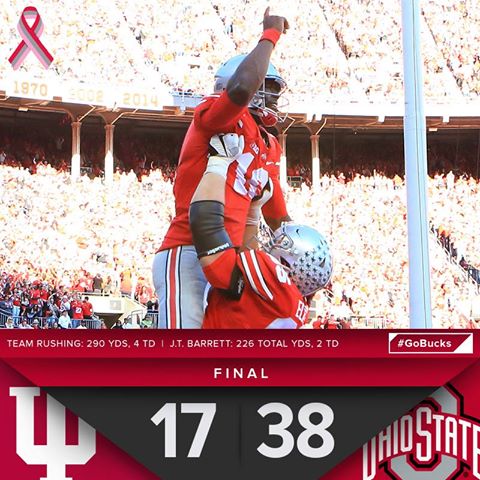 Ohio State Buckeyes wide receiver Parris Campbell (21) returns a kickoff up field against Indiana Hoosiers defensive back Rashard Fant (16) during the 1st half of their game in Ohio Stadium in Columbus, Ohio on October 8, 2016. (Kyle Robertson/ The Columbus Dispatch)

Second-ranked Ohio State (5-0, 2-0 Big Ten) was forced to rely mostly on its ground game, which accounted for 290 yards, and some tough play by its defense – including a critical fourth-quarter stop on its own 4 yard line following a Barrett inception – to fend off the Hoosiers, who had upset Michigan State last weekend.

Ohio State’s defense held when it had to, also forcing Indiana (3-2, 2-1) to turn the ball over on downs on the Hoosiers’ own 33 with 5:22 left and the Buckeyes leading 31-17. Five plays later, Barrett hit Dontre Wilson with a 37-yard touchdown pass to put the game out of reach.

Safety Malik Hooker sealed the win by picking off Richard Lagow on Indiana’s next series. The Buckeyes held Indiana to just one score in the second half.

”It was just an awkward game,” Meyer said. Lagow was 14-of-28 for 182 yards and two touchdowns, but Indiana managed just 99 yards rushing. Indiana had 281 total yards, compared with 383 for the Buckeyes.

”They have a great defense,” Lagow said. ”They’re going to be tough for anybody the rest of the year, That’s on us as well as them being good. We didn’t hit a couple plays and they made a couple plays.”

Indiana: Buoyed by last week’s upset of Michigan State, Indiana was effective at times but couldn’t keep up with the more talented Buckeyes. Ohio State: The Buckeyes’ defense played tough and kept Ohio State in the game. But Ohio State showed its passing game can be stopped, though Barrett can find a way to win.

Indiana: The Hoosiers face another stiff test next week at home against undefeated No. 12 Nebraska. The Cornhuskers were off this week.

Ohio State: The Buckeyes may face their toughest challenge of the season next week when they play No. 11 Wisconsin on the road. The Badgers were off this week.