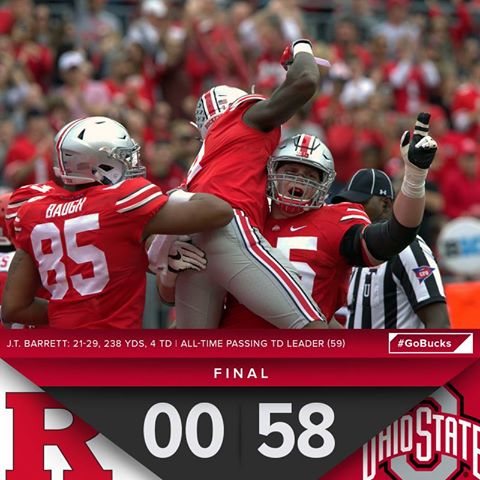 Former Ohio State Buckeyes head coach Earle Bruce tips his hat as he dots the “I” during the marching band’s Script Ohio performance before the game against the Rutgers Scarlet Knights at Ohio Stadium. Greg Bartram-USA TODAY Sports

COLUMBUS, Ohio (AP) – (October 1, 2016) — J.T. Barrett broke the school record for career touchdown passes with the third of his four TD tosses Saturday, No. 2 Ohio State’s stifling defense forced Rutgers to punt on each of its 10 drives and the surging Buckeyes gave Chris Ash a rude welcome in his return to The Horseshoe with a 58-0 victory.

Barrett was 21 for 29 for 238 yards before giving way to backup Joe Burrow near the end of the third quarter. He now has 59 TD passes in 27 career games for Ohio State.

Freshman tailback Mike Weber continued to cement his place in the Ohio State (4-0, 1-0 Big Ten) backfield, rushing for 144 yards on 14 attempts before also taking a seat in the third quarter. He also scored a touchdown, cutting around the left end and racing untouched for a 46-yard score 2 1/2 minutes into the second half.

”They smothered us,” said Rutgers coach Ash, who spent the past two seasons as a co-defensive coordinator for the Buckeyes. Ohio State piled up 669 yards of total offense, including 410 on the ground. Barrett threw touchdown passes to four different receivers.

”They played exceptionally well today, so no, they were not better than I thought, and I thought all along they were pretty darn good,” Ash said.

Safety Chris Cioffi had one of the few highlights for Rutgers, picking off a Barrett pass on Ohio State’s opening drive.

”We came out and fought in the beginning, but the wheels just fell off,” Cioffi said.