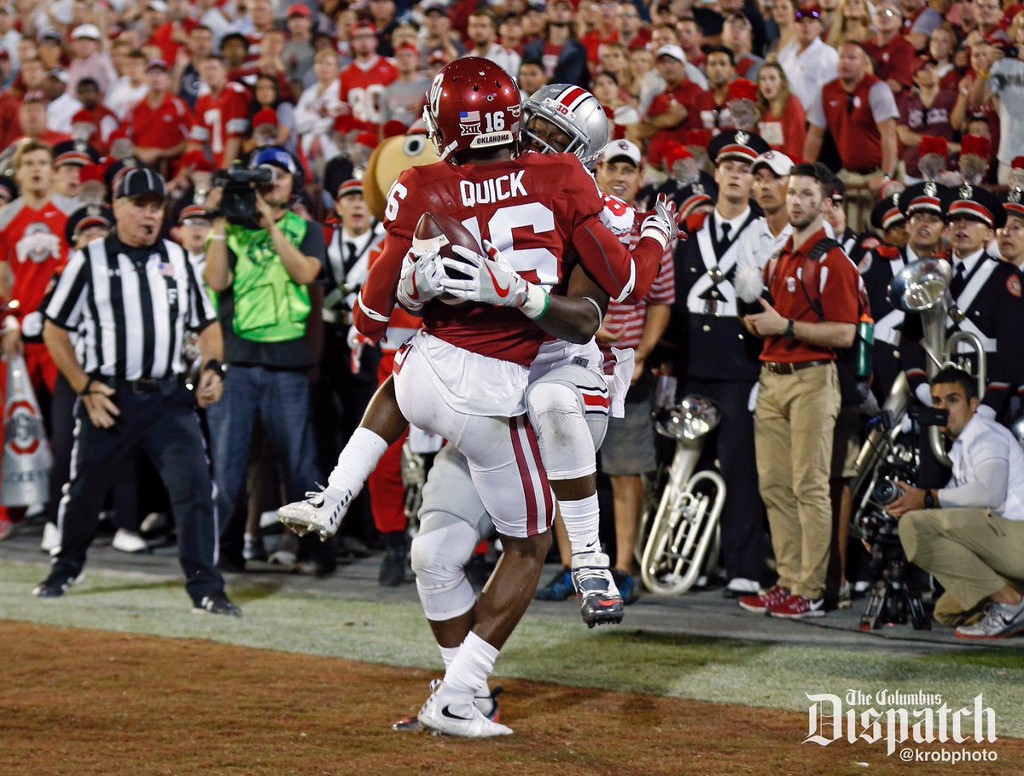 Brown, who entered the game with five catches and one touchdown in his career, caught five passes for 72 yards. On his best grab, he reached around Michiah Quick and held onto Quick and the ball while falling out of bounds for a 21-yard touchdown reception with 6 seconds left in the first half.

”Anytime J.T. puts the ball in the air, he’s putting trust in me, and I try to come down with the ball for him,” Brown said. ”I have my quarterback’s back. It felt good to be able to make that play and put some points on the board.”

J.T. Barrett passed for 152 yards and four touchdowns and ran for 74 yards for the Buckeyes (3-0), a team that lost 16 starters from last year’s squad and was playing in a hostile environment for the first time this season.

”This was the coming-of-age game,” Ohio State coach Urban Meyer said. ”I just made a comment earlier about that, I took a deep breath and as I just watched our guys be on the buses, I thought, `My gosh, this is a young team.’ This was for a lot of them their first road experience. I’m very proud of them.”

Mike Weber ran for 123 yards, pacing an attack that pounded out 291 yards rushing.

”Our inability to stop the run …They got us out of a lot of our stuff and made it a physical game, and we didn’t react well to it,” Oklahoma defensive coordinator Mike Stoops said.

Oklahoma (1-2), which lost its opener to Houston, was in desperate need of a big win to keep its hopes of returning to the College Football Playoff alive. Instead, a school-record home crowd of 87,979 watched the Sooners get dominated for most of the night. Ohio State led 35-17 at halftime.

Now, the Sooners turn their focus to Big 12 play.

”We’ve got a lot of work to do if we’re going to win the Big 12,” Oklahoma coach Bob Stoops said. ”We’ll keep a positive attitude. We’ll keep working to improve and do our best to have a better showing when we get back on the field in a couple of weeks.”

Ohio State’s Curtis Samuel broke loose for a 36-yard touchdown run on fourth-and-1 to open the scoring. The Buckeyes threatened to break the game open when Jerome Baker scored on a 68-yard interception return, but Oklahoma’s Joe Mixon returned the kickoff 97 yards for a score.

Ohio State seized momentum for good when Marshon Lattimore intercepted a pass by Mayfield, then Brown caught a 37-yard touchdown pass from Barrett on the next play to give the Buckeyes a 28-10 lead.

Opening statement:
“This is probably one of the top five hardest places to play. They’re a very talented team. From the opening kickoff, our guys swung as hard as we could. I made a comment earlier about how I almost took a deep breath when I watched our guys get on the buses and on the plane thinking, `my gosh, this is a young team.’ For a lot of them, this was their first real experience, and I’m very proud of them.”

On Senior CB Gareon Conley’s injury:
“From my understanding, he’s going to be fine. It was just precautionary and it was just a stinger, so he should be fine.” On the second half performance from specifically the younger guys: “I can’t wait to see the tape. But as coaches, you sit there and think about the kickoff return (Joe Mixon’s 97-yard TD return) and some of the timeout calls and see some of the things that show your youth.”

On Noah Brown’s catch over Michiah Quick and his overall play:
“I haven’t seen it yet. From what I heard, it’s one of the great catches. He’s a grinder. We love grinders and guys who work so hard. He was a starting receiver for us before he got hurt last season and to see him have success — that’s a good thing.”

On if it was a coming out party for Freshman RB Mike Weber Jr.:
“I thought he played great and was very stout. He ran the ball really well against a defense that is committed to stopping the run.”

On Curtis Samuel and Mike Weber Jr.’s one-two punch:
“Curtis Samuel was a guy who waited his turn — he’s a talented guy. I think that a `one-two punch’ is a great way to identify those two.”