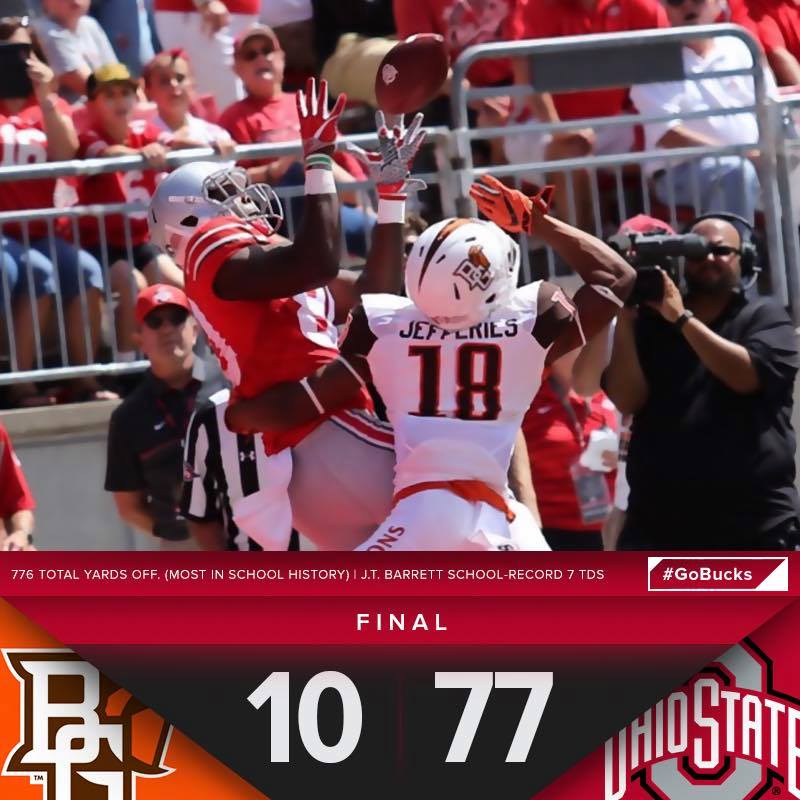 After the 77-10 romp, Meyer made it clear that he wants to see what his team can do when the competition gets more difficult, especially in two weeks when the No. 6 Buckeyes have to travel to Oklahoma.

Meyer started the day worried about how his many inexperienced players would perform on the big stage. Thirty Ohio State players were participating in their first college game. Lots of them ended up getting involved in the record-breaking day.

Eight players scored touchdowns on offense as the Buckeyes (1-0) overpowered the Falcons in front of a crowd of 107,193.

Veteran quarterback J.T. Barrett broke a school record in being responsible for seven touchdowns – six passing and a seventh on the ground. The junior was 21 for 31 for 349 yards and rushed for another 30 before giving way to backup Joe Burrow with 6:30 left in the third quarter.

”We definitely want to spread the wealth,” Barrett said. ”There’s only one football, but try to get the ball in the playmakers’ hands.” ”We pretty much got taken to the woodshed here today,” Bowling Green coach Mike Jinks said.

BG’s experienced offensive line did a decent job protecting quarterback James Knapke, who was 12 for 33 for 110 yards, but the Falcons couldn’t overcome off-target passes and multiple dropped balls.

The Falcons’ only touchdown came in the first quarter when Barrett’s second pass of the day was picked off by linebacker Brandon Harris and returned for a 63-yard touchdown.

”It’s hard to take positives from a butt-whooping like that,” Jinks said.

BOWLING GREEN: The Falcons receivers need to start holding on to Knapke’s passes if they’re going to have success.

”Any loss is difficult, but every one is a learning opportunity,” Knapke said. ”That’s the attitude we’re going to take from it. These young guys got a taste of what it’s like.”

OHIO STATE: The Buckeyes did what they wanted: break in a bunch of inexperienced players against a huge underdog. They also showed they have many weapons and stunning team speed.

BOWLING GREEN: Bowling Green could manage only 69 yards on the ground. The Falcons’ primary tailback, Fred Coppet had just 38 yards on 12 carries.

OHIO STATE: The 77 points scored are the most by an Ohio State team since a 76-0 win over Florida A&M Sept. 21, 2013. The Buckeyes’ 417 passing yards rank fourth-most in a single game in school history.

Ohio State: With No. 3 Oklahoma’s loss to No. 15 Houston Saturday, the No. 6 Buckeyes could move up.

Starting defensive tackle Tracy Sprinkle left the game with a leg injury at the end of the first quarter. Meyer said it’s likely a tendon injury that will end Sprinkle’s season.

BOWLING GREEN: After the loss, the Falcons get their own tuneup game at home next Saturday against North Dakota. The Fighting Hawks, a Big Sky conference team formerly known as the Fighting Sioux, went 7-4 in the last season in the FCS.

OHIO STATE: The Buckeyes will get another game at home against an overmatched opponent when Tulsa visits next week. Then it’s on to play at Oklahoma the following week.