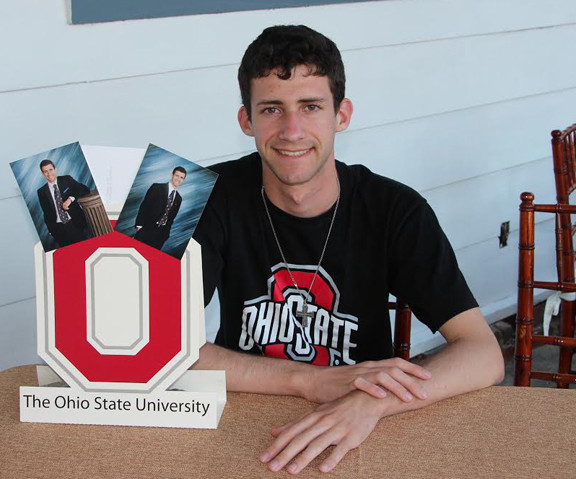 LOS ANGELES (June 27, 2016) – Thanks to the exceptional wisdom and guidance of two brothers and Buckeye alums, The Ohio State University Alumni Club of Los Angeles (OSULA) is pleased to announce that another Southern California high school graduate is headed to Columbus this fall to begin an Ohio State career with the help of an OSULA scholarship. OSULA has awarded a $5,000 scholarship to Glendale native Blake Harriman for the 2016-17 academic year. The Loyola High School of Los Angeles graduate is following in the footsteps of his father Jordon (B.A., mathematics) and uncle J.D. Harriman (B.S., ceramic engineering), who both graduated from THE Best Damn University In The Land in 1979.

“When I was notified that I received the scholarship I was very excited and happy that I had received such an amazing reward,” says Harriman, a four-year California Scholarship Federation honoree at Loyola High. “I am very proud of myself and my father and uncle for attending such a great school and I look forward to going to Ohio State for the next four years of my life. The location is also ideal because I have a lot of family in Ohio.

“I’ve always wanted to attend OSU because of all the stories they have told me and the school spirit,” reflects Harriman, of the influence his Buckeye dad and uncle have had. “I have been accepted to the engineering program and know it’s one of the best in the country.”

Blake plans to major in computer science and engineering. He has future designs on becoming a programmer at NASA’s Jet Propulsion Laboratory (JPL), where he served as a full-time intern and programmer in 2015, working on coding and organizing data at the Flight Projects Center for “Mars 2020” mission. He is continuing work at JPL this summer, prior to heading to Central Ohio for his freshman year.

Although diagnosed with epilepsy when he was six years old, Harriman has become very knowledgeable about his condition and takes great care of himself, and has blazed a proven track record of success ever since. While at Loyola, Blake excelled in the classroom by posting an impressive 3.9 GPA. He also shined outside of class as a leader in the school’s math, chess and programming clubs and robotics, speech and debate teams, in addition to serving three years as a peer math tutor.

On top of his studies and extracurricular activities at Loyola High, his busy schedule never deterred him from reaching out and volunteering to help others. He served as a coach all four years of high school in the Challenger Division of the Jewel City Little League Baseball, helping physically and mentally disabled kids (ages 6 to 18) learn how to play baseball and develop their skills to have fun. While the fall of 2016 will represent his first year at Ohio State, Harriman is already familiar with the demands of college. As a high school sophomore, he participated in the COSMOS program at UC Davis, researching and performing lab experiments in the selective STEM program. He also completed a statistics course at East Los Angeles College during the summer of his junior year.

What he has yet to experience, however, are the four seasons of exciting weather he will encounter crisscrossing through his first year on the Oval, or the goose bumps he will no doubt feel when TBDBITL first comes out of the tunnel in Ohio Stadium to mark the beginning of a new football season in the ‘Shoe for powerhouse Buckeyes.

“I believe the two things I am most looking forward to for my freshmen year,” explains Harriman, “are going to the football games that I have heard so much about and how awesome they are, and being able to go outside of my comfort zone and study and learn in an environment completely different from the one I am in now.”

Since his father and uncle have already shared the grand traditions of the Scarlet and Gray with Blake, he should have a terrific head start on his transition to college life, setting up yet another successful and memorable OSU career in the Harriman family.

Serving Buckeye alumni in Los Angeles, Riverside, San Bernardino, Santa Barbara and Ventura counties in the Greater Los Angeles area, OSULA is committed to providing students from Southern California the opportunity to sing the praises of Ohio State. Its student recruitment committee visits young students each year in an effort to attract top students to Ohio State. Most importantly, OSULA awards scholarships each year and several years ago established an endowed scholarship in the club’s name. OSULA accepts tax-deductible contributions to the OSULA Scholarship Fund, and anyone interested may send a check (made payable to The Ohio State University) to OSULA, 2040 Hermosa Ave., Hermosa Beach, CA 90254. Thank you for supporting The Ohio State University and OSULA. @OSU_LA @OhioState @OhioStateAlumni #BuckeyeForLife